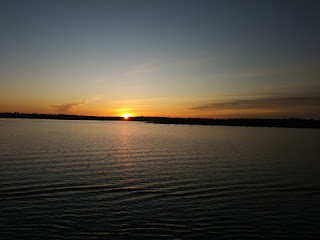 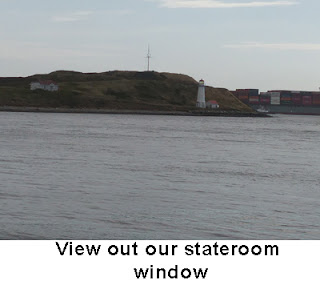 Janet is feeling much better this morning. She even had a regular breakfast! We were 2 hours late getting into port due to bad weather last night. The captain of our ship couldn’t get a pilot boat to guide us into the harbor so we had to wait. We went back to our cabin and watched out our window as we entered Halifax. 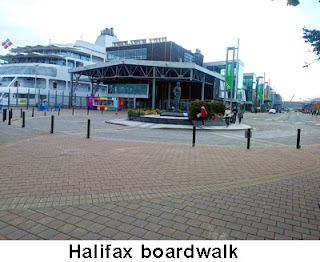 There was a very nice boardwalk we decided to enjoy the coast.  It was 57F windy, cold but sunny. It drizzled a little bit. You could feel the northeast autumn coming in strong with the strong gusts. 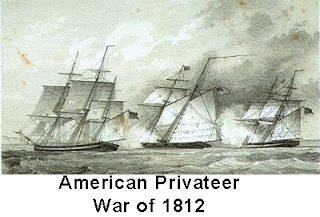 We learned a lot about Halifax as we walked reading the many plaques along the way. Now it's a major business center and known for its maritime history. Waterfront warehouses are known as the Historic Properties remain from Halifax’s days as a trading center for privateers during the War of 1812. We didn't know the difference between pirates and privateers. The plaques explained that privateers were armed ships owned and officered by private individuals but authorized for use in war, especially in the capture of enemy merchant shipping. How about that! 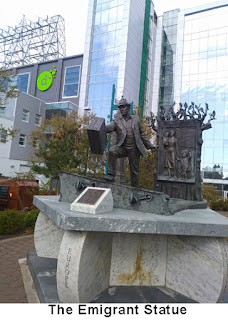 Along the route, there was a touching tribute to the families that had been separated while the husband set off to America for a better life. It was sweet. 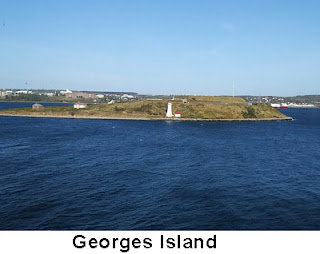 Across the bay, there was Georges Island with a distinct lighthouse.  There was an old fort, Fort Charolette, named for King George III's wife, Charolette, 1755-1763 during the French and Indian war. Later the fort was used as a prison for expelled Acadians. The lighthouse was built in 1917 and still in use.
The city is like any other city except for extremely tall skyscrapers that looked like apartment buildings. We walked to the Maritime Museum which we had planned to see. But by the time we found it we were exhausted. Bill’s excursion yesterday to Bar Harbor, and Acadia Nt. Park took a lot out of him, and Janet was just getting over a major bout of intestinal distress. So we walked back the ship, about a two-mile walk round trip. 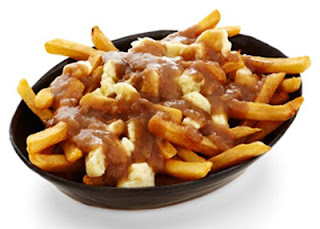 Poutine
We noticed every fast food place on the island was selling Poutine.  They are  French fries with brown-gray, and cheese. Apparently, they are very popular among the locals. 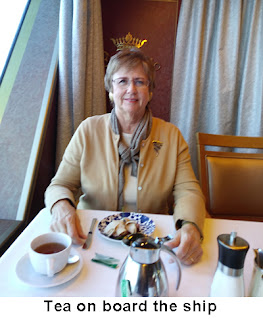 We went to Tea on the ship at 3:30 serving small sandwiches, sweetbreads, and the most amazing pastries!

We dressed for the evening, and headed for the library spent an hour reading (Janet began One for the Money by Janet Evanovich and Bill began reading If you lived here...I'd know Your Name by Heather Lende) with hot chocolate by the window. The sunset was amazing 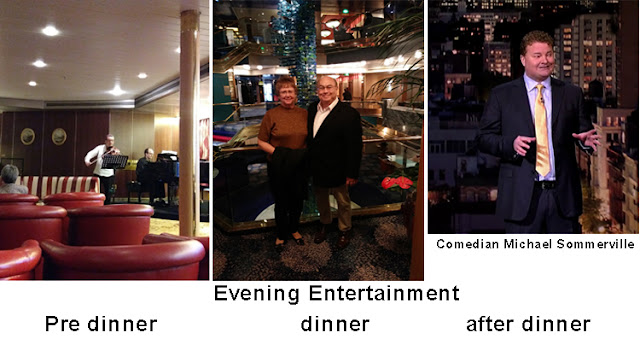 We heard violin and piano music playing in the Queen’s Lounge and headed there to enjoy the pre-dinner music. It was lovely
Before we knew it, our reservations were ready at the Pinnacle Café. The food and atmosphere were exceptional. We dined for 1-1/2 hours! A real first for us.
We finished at 8:30 and decided to see the 9:30 comedy show. We headed  back to the library to read again until the show started. The show starred comedian Michael Somerville, he appeared with David Letterman, "6 times, 8 if you include re-runs". He was very good, we both laughed quite a bit. 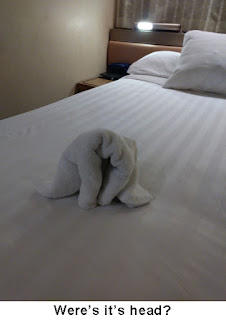 Got back to our cabin, all made up with new towels. We had  most unusual towel object on your bed. Looked like an animal body with...no head!?! 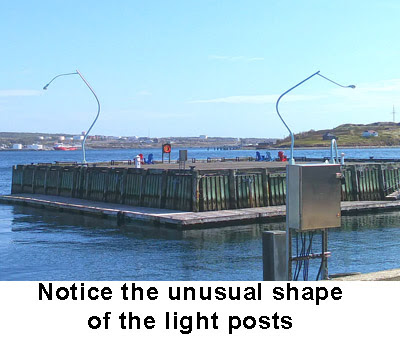