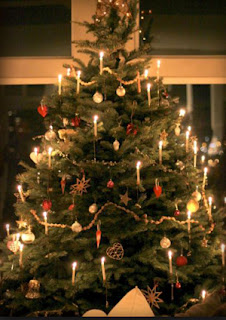 Since we got married we've made it a tradition to buy an ornament  for our Christmas tree everywhere we travel that year. After 45 years of marriage and our extensive travels we have quite a tree full.
Sometimes our trip took place in the summer or off season and Christmas tree ornaments were not available. We then turn to refrigerator magnets, or key chains (by removing the chain and the ring it becomes a lovely ornament).
So we don't forget where and when we traveled, we write on each ornament, the city and year we visited. Every December we decorate the tree and it becomes a waltz down memory lane.

Here are the ornaments we purchased from our Scandinavian trip:

Copenhagen, Denmark
Our last day in Copenhagen we were walking along a small cobble stone street with small shops lining the block. The quaint  buildings were built around the early 1700s. We happened to walk into one shop that had a nice selection of key chains. We bought one, disconnected the key ring when we got home and put the hook on. 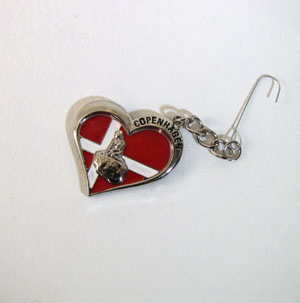 Warnemunde, Germany
We were walking along the "seaboard" enjoying the warm sun, and  crashing of the waves. The cabanas were lovely and large. We came across a light house and  modern gift  shop. We continued to stroll and entered a small gift shop on the sand. This key chain was the only one that had the light house on it and the only one left. Two other people had looked at it and put it back so we snatched it. 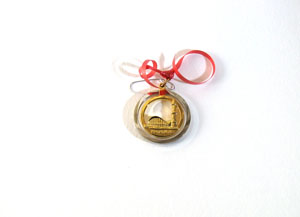 Riga, Latvia
As we toured the town we came across an impromptu two man show in the street. The people surrounded the pair, clapped and sang along. Several young girls were dressed in traditional clothes, singing and dancing along with the music. On the way back to the ship we came across a souvenir shop in a romantic corner of the city lined with bistros. As soon as we saw this refrigerator magnet we had to have it. When we got home we converted it to an ornament. 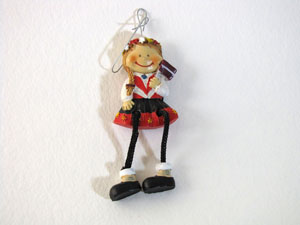 Klaipeda, Lithuania
Klaipeda was an beautiful city full of flowers hanging from light posts, and in flower towers throughout the city. It got windy so we ducked into an Amber Shop to get out of the wind. The items were lovely, beautifully cut amber in jewelry and art work, but they were way out of our price range because they were real amber. We found a flea market on the way back to the ship and bought this refrigerator magnet  in honor of the amber we drooled over. 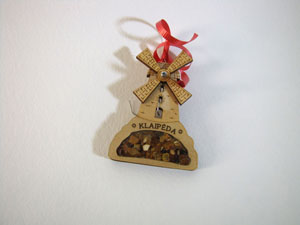 Trallinn, Estonia
Tallinn was so very beautiful! The old town brought a real feel for the days of maidens and knights. I truly felt I was in a fairy tale the entire time we were in the old town. We wanted an ornament that depicted the ancient castle and streets. We were fortunate to find this ornament, (not a keychain) in a small shop in one of the ancient building along the castle gates. 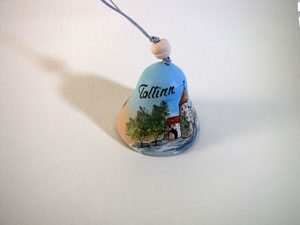 Helsinki, Finland
Our time was very short in Helsinki and we regret we were not able to  see  most of the city since we were on foot. We took a harbor cruise, and found out  that moose and other animals will occasionally wonder into the city. The tour guide told of a young moose got lost and ended up in the park full of trees. She talked bout the tourists and visitors surrounding the park taking pictures and the poor young moose scared to death. It's mother should ahve been nearby but wasn't. Eventually their animal game people came and got him on his way to the hills. We found this in a street market in honor of that brave little moose. 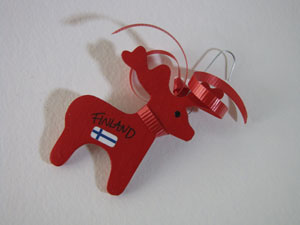 St. Petersburg, Russia
We were very fortunately to be docked in St. Petersburg for three days and two night. Hence, we had the opportunity to enjoy the city. I wanted a traditional ornament for this city because of its beauty and history. We found this in a Christmas shop along the canal and fell in love with it. It was actually an ornament . 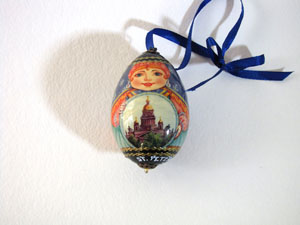 Stockholm, Sweden
We bought this keychain at the Palace. We were so impressed with the clean, classy designs of Nobility, i.e. the ancient robes, crowns and scepters. The docents at the palace were very nice and anxious to answer any questions we had. 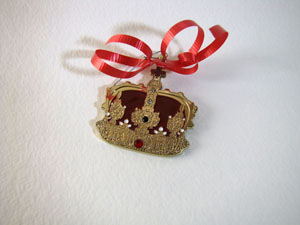