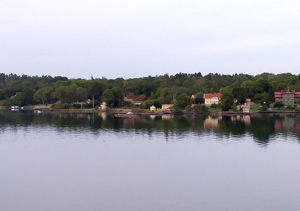 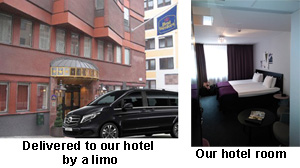 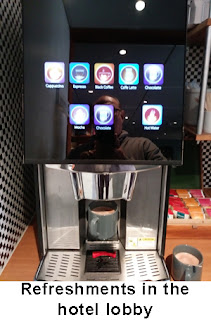 We stood on the veranda of our stateroom and watched the scenery pass as we pulled into port. We were surrounded by islands with dense trees and small houses/building. The trees were beginning to change to fall colors. Everything worked as planned; our driver arrived right on time to pick us up from the dock and delivered us to our hotel.
After being on the ship 10 days, completely coddled with servants and food (all day long) we had to forage for ourselves. It was a rude awakening to get back to the "real" world... 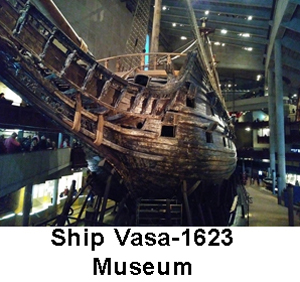 Vasa Museum
The forecast said, “heavy rain all day”. So we took our rain gear and carried it around all day. Not a drop, but freezing cold with many gusts of strong wind! We went to the Vasa Museum, a 1623 warship that was supposed to be high tech for its day. It sank 20 minutes into its maiden voyage and rested at the bottom of the harbor for 333 years. In 1950 it was brought up from the sea mostly intact. It’s an amazing ship if only for its massiveness. 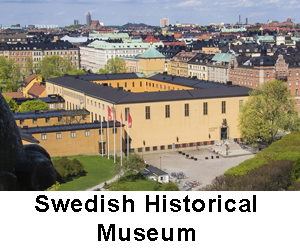 Swedish Historical Museum
The Swedish Historical Museum is all about prehistoric Sweden and the Viking era. The Vikings were big, mean,  light-skinned people, and smart enough to figure out how to navigate the Nordic seas all the way to Newfoundland! Then they went south to Portugal in the 12th century. Some were described them as "giants with fire colored hair". 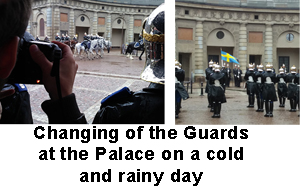 Changing of the Guard
The next day after breakfast we left for the Royal Palace. It was raining, heavy winds and only 50 degrees. The rain got heavier with gale winds as we walked. We had to navigate cobblestone streets, up a slight hill. The wind was pelting the rain at our face and front of our rain gear, We slipped and slid on the cobblestones. Because of Stockholm's drainage system, we didn't see much in the way of flooding or major puddles. We made it to the palace just in time to see the Changing of the Guard. They wore full uniforms (including feathered helmets), and rode on huge white and brown horses and mounted military brass band. The musicians actually played while riding their horses!
Afterward, we decided to take the three-hour trip back to the hotel and let the storm blow through. 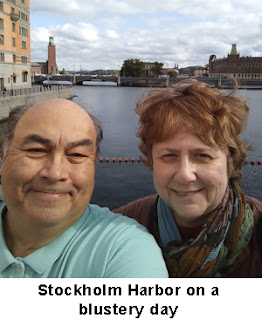 Posted by Janet Lynn at 5:53 PM No comments: 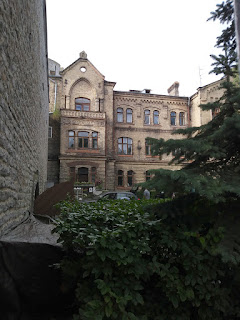 Cruising to Estonia
We sailed for Tallinn, Estonia overnight and hit a storm. We were rockin’ and rollin’ all night. We woke up to a dark, cloudy, rainy morning and dreaded the 2 km (almost a mile) walk to the old town. 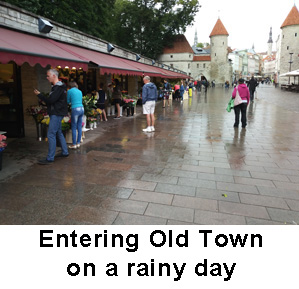 Then we heard the PA system announce there would be a shuttle bus provided for those who wanted to explore Tallinn on their own. You gotta love Oceania Cruises. (They take the pain out of almost everything.) 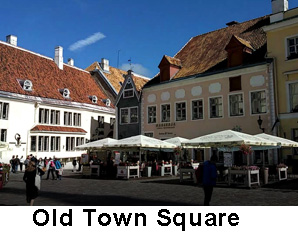 A day in Estonia
Tallinn, is the capital of Estonia. I call the "Fairy Tale City". This is a country we knew nothing about, absolutely nothing. 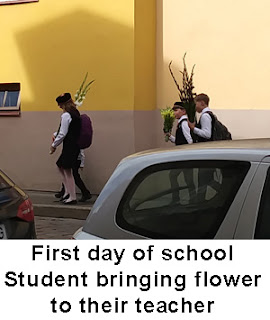 It started to rain just as we got into town and ducked into the Tallinn City Museum. Since the rain was coming down heavily, we decided to pay $3 and stay for awhile. The town apparently has been a settlement since 1300 BC! The town was named and built on a hill as a fortress in 1100AD. It is a definite medieval city. The towers, fortress, and castle still stand as well as the homes of the rich from the 14th and 15th centuries. Old Town
The bus dropped us off at a park and we walked three blocks to Old Town. We turned the corner and saw high grass-covered earthen walls on our left with a long flower market lining the street at the base of the ancient wall. Ahead was the medieval gate to the old city with tall stone towers capped by clay tiled conical (cone-shaped) roofs on either side. We felt like we'd been transported to the days of Knights and Vikings, except this was the real deal. Not of fake Hollywood recreations. We wandered further and found street after street of fantasy-like scenes. 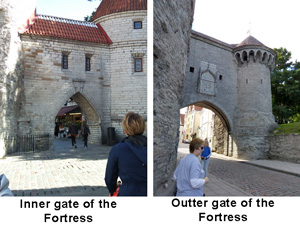 Walking through Old Town was like walking through a fairy tale:  Rapunzel, Sleeping Beauty, Snow White, etc. A few narrow streets took us past several embassies of foreign nations.  We were amazed that the city has been so well preserved and rebuilt after so many invasions  We came across the town square lined with colorful outdoor cafes and restaurants. We stopped and had hot chocolate at an outdoor, covered café surrounded by ancient brick buildings. We stayed about an hour just enjoying the view of the square. It is such a beautiful, quaint, charming city. I hope to come back to Tallinn some day. 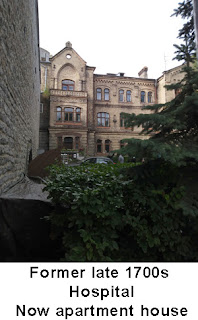 As the ship left the dock that night and sailed north, the fog rolled in. From the sea, we could see the castle towers on the hill with the fog staying close to the ground. It looked like the town was floating on a cloud.

Last night of the cruise
Tonight is the last night of the cruise before we disembarked in Stockholm tomorrow morning. There was a farewell party in the top deck lounge with full-length windows. The sky was black with a half-moon shining bright and trailing its light along the choppy sea. It was a magnificent sight.

St. Petersburg, Russia
Tour of the Hermitage and Symphony Performance 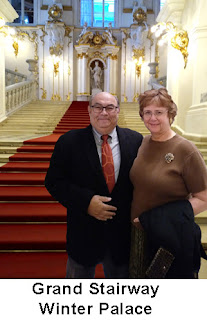 We were told to "dress" for the evening. The tour was after hours reducing the crowd.

The Winter Palace and Hermitage was amazing. Just as it was the last time I was here, it took my breath away. The craftsmanship of the ceilings and wood inlays of the floors were so delicate and lovely. The tour through the Hermitage lasted 90 minutes and included a great collection of Rembrandts and collectibles. Then what we had been waiting for, the St. Petersburg State Symphony performance. We were shocked to see it was a full symphony orchestra!  We sat in a large room surrounded by Rembrandt paintings, skylight and ornate ceiling listening to a great collection of the masters. The program included the Blue Danube and Barber of Seville. Afterward, we were treated to a Champagne Reception in the atrium with cherry juice for non-drinkers. When we left the building, several cathedrals and buildings across the canal were lit up against the black night sky reflecting in the canals. It was romantic, I couldn't have planned it better myself. 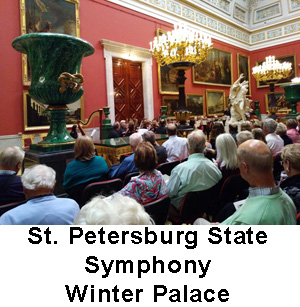 There were four buses full of people returning from evening events at the same time. Customs took forever and the line to get back onboard was 30 minutes in the freezing cold. Good thing we dressed in layers! We were cold, tired and hungry as we were it was heartwarming to walk into our stateroom and see two covered plates of food waiting in our room.
(For a video of the performance copy and paste: 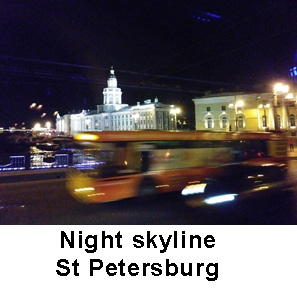 We were docked in Russia for a total of three days. It is a Magical City. 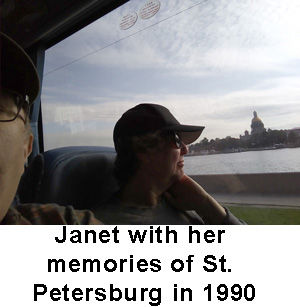 Posted by Janet Lynn at 1:57 PM No comments: 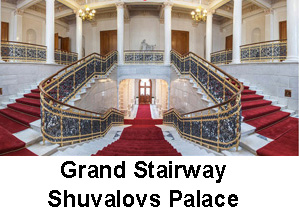 I never thought I would step on Russian soil again, never in my wildest dreams! I was in Russia in 1990 for 3 weeks (went to St. Petersburg, Moscow,  and Prague, Czech Republic). It wasn’t until we cleared immigration and I actually walked past customs, that it sunk in that I was actually here...again. 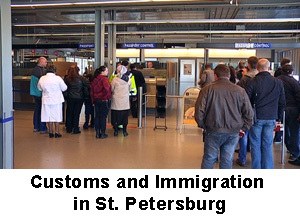 Faberge Museum Tour
I saw only a few Faberge Eggs last time I was here because they on an exhibition to the US. I had forgotten how gorgeous they were. The intricate detail of design was truly amazing.

The museum is housed in the  Shuvalovs Palace, one of the most beautiful palaces in St. Petersburg, formerly owned by the Naryshkins and the Shuvalovs, two famous aristocratic families. 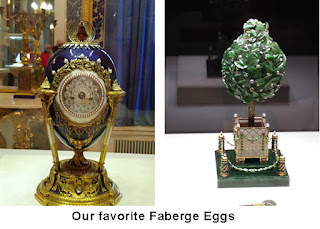 Carl Faberge was French-born but lived in Russia for many years. He began making decorated eggs for Peter the Great and his royal heirs. When the revolution occurred he escaped to Switzerland where he died around 1920. When he fled, his workshop was left behind and hidden by friends. After WWII Faberge’s heirs retrieved the workshop and sold it to an artist in Italy. They also sold him the Faberge name.
We spent the afternoon relaxing on board the ship, hit the hot tub, and had dinner with our new international friends on board.

Tour of the City
We took a bus tour through St. Petersburg and it was better than I remembered. The streets are repaired, the buildings no longer in shambles and so many new skyscrapers than before. But the sense of antiquity and charm of the city still remained. We spend time touring St. Peter and Paul Fortress which contains the St. Peter and Paul Cathedral. The cathedral was Marvelous! 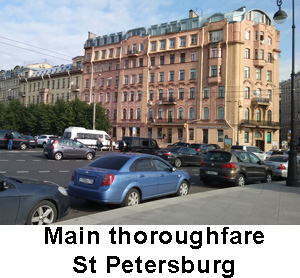 After the 4 hour tour, we returned to the ship at 1pm, had lunch and relaxed in the library.

Posted by Janet Lynn at 6:15 AM No comments: